Lake Viking Resident, Cathy Poindexter, has accepted the position of Managing Director of the Viking Valley Association. She will begin her duties on January 1, 2022. Cathy has been a full-time lake resident for four 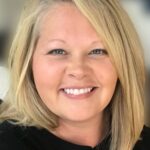 years and has been around the lake her entire life.  Cathy and her husband, Chad, have two children, Nathan and Kiley.  Nathan is 22 years old and currently serves in the United States Marine Corp.  Kiley is 17 years old and is a Senior at Gallatin High School.  Chad has owned and operated Bestway Seamless Guttering since 2014.  Prior to coming to Lake Viking, Cathy worked as City Clerk at Maysville then worked in Public Safety for 19 years.  She worked for the Cameron Police Department for 16 of those years and held positions of Communications Supervisor, 911 Coordinator, Terminal Agency Coordinator, and District Training Coordinator.

During her employment at Maysville, Cathy prepared annual budgets and financial statements, drafted ordinances, attended Board Meetings, and did payrolls and accounts payable and receivable. During her time in law enforcement, she took an active role in streamlining the 911 service into the present-day configuration that results in a cost-efficient regional operation.

Cathy assumes the newly created position of Managing Director as the final phase of a VVA staff re-organization that has resulted in several newly hired employees and a re-alignment of responsibilities. Previously the Lake Manager position, which has been held by Shad Mort for 17 years and by Robert Feigley for many years before that, was a maintenance-oriented position. Starting in 2022, the Managing Director job will be from an administrative perspective with Billy Hunter serving as the Maintenance Manager and Shad Mort moving into a contract consultant role where the VVA will still be able to benefit from his expertise in dredging and roads.

Cathy looks forward to continuing to work for the VVA. You might say that she is third-generation Lake Viking. Her grandparents owned a lot here, and her parents Justin and Connie Hines have resided in a house here for many years. Cathy looks forward to working with the staff and members of the Viking Valley Association.