A tradition of service…

In May of 1973, The Viking Valley Association proudly announced the acquisition of the Lake’s first fire truck. The fire truck, despite being new to Lake Viking …wasn’t exactly a spring chicken. It was, in fact, a seasoned old warrior, which had seen action in many fires after having been purchased new by the Raytown Fire District …in 1948.

The fire truck, a 1948 Ford with a standard two-ton chassis, was outfitted and assembled by the American La France Corp. The Lake Viking Association found out the truck was for sale through George Smith. Smith was a Lake Viking resident who had, previous to his retirement, served as the Raytown Fire Chief for 25 years. He was present the day the truck was delivered brand new to Raytown.

Ironically, the fire truck had also served as Raytown’s first.

In the Raytown Fire Department logbook, which George Smith kept during his years as Fire Chief, he records the arrival of the new fire truck on December 8, 1948. The truck was shipped on a railroad flat car and, after being unloaded, was immediately fitted, by Raytown Volunteer Firemen, with 300 feet of hose. Raytown paid $7,792.79 for the truck in 1948. In 1973 it was sold to the Association for $3,606.

It is said that beauty is in the eye of the beholder. Despite its age, there were many attractive qualities about Lake
Viking’s first fire truck. The truck’s bright red exterior still held its luster, and it had an aerial ladder system that was only 2 years old. The engine had been rebuilt and, as a result, turned over perfectly and started as well as a new model. Amazingly, when the fire truck was delivered from Raytown to Lake Viking, it was still on the original front tires.

By 1973, Raytown had experienced tremendous growth and was seeking a higher ISO rating for its fire department.

During Chief Smith’s 26-year career, Raytown’s Fire Dept. had expanded from only one full-time employee (Smith), to a point where he had 19 firemen under his supervision.

One of the criteria for a better rating for the expanded department was a modernized fleet of trucks. Thus, it was
adios to the old ’48 model. George Smith knew that there still wasn’t anything wrong with the old fire truck. He advised the Association to make the purchase.

In the meantime, The Lake Viking Association needed an ISO rating improvement as well. The current rating
was non-existent – a big zero! – from having no fire truck at all. Worse yet, a very expensive home at the lake had just burned to the ground as a result. The fact that Raytown’s truck had a pump and a 500 gallon water tank was also an important factor. At that time, there were few hydrants at the Lake and water often had to be pumped from the Lake.

Yep, this was a match made in heaven. The old 1948 fire-truck still had a lot of years of service left in 1973. It served the Lake Viking Volunteer Fire Department until it was finally retired in 1989.

As Lake Viking celebrated its 40th anniversary in 2007…

After years of carrying an ISO fire rating of 9.0. Chief Hillman is able to announce that as a result of his department meeting the necessary criteria, Lake Viking’s rating will drop to 7.0 as of November 1,2007.
This lower rating promises to result in lower insurance rates for many Association Members. The Association now has three trucks in their fire-fighting fleet: 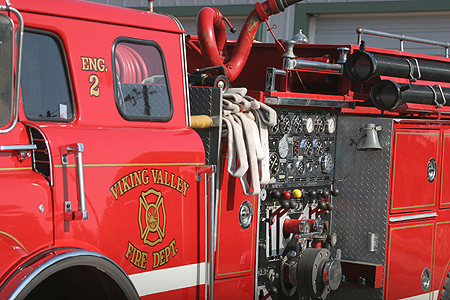