Horsts take a trip ‘Down Under’

If you are ever thinking about traveling to an interesting far-away destination, talk to Lake Viking Association members Harlan and Jeannie Horst. They went to Australia and New Zealand on a recent trip and had a great time. They toured panoramic countryside areas and traveled to numerous harbors, two world-class cities, and several islands. The journey lasted 21 days and was jam packed with a busy itinerary filled with spectacular sights.

As the crow flies, Lake Viking to Melbourne, Australia, is over 8,900 miles. As the jet airliner flies, it is a four-hour flight from Kansas City to Los Angeles and 15 hours from L.A. to Melbourne, Australia. The Horsts’ trip also included plenty of boat travel including three days on Holland America backtracking from Sydney to Melbourne, and also numerous ferry excursions and at sea once again en route to Tasmania and New Zealand.

First on the agenda were the two major cities. Both Sydney and Melbourne have  populations of around 4.5 million and both are situated on the coast (Australia has more miles of coastline than the USA) with bustling harbors and plenty of things to see and do. 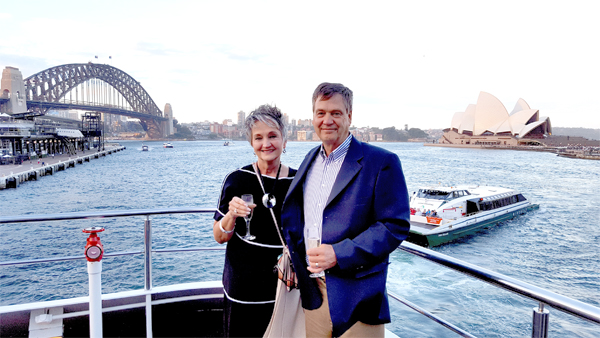 Sydney features two iconic Australian sights, the Sydney Bridge and Opera House which are in close enough proximity that they can serve as a great photo background (see accompanying picture). Harlan and Jeannie saw a play at the Opera House and also went to several Sydney beaches and parks, and traveled to the Blue Mountains. This rugged range features a famous rock formation called the three sisters and the world’s steepest railroad.

Melbourne also had plenty of sights, including the Queen Victoria Gardens, Federation Square, and the Shrine of Remembrance which is an impressive memorial to Australia’s war casualties. While Harlan and Jeannie were in Melbourne they also viewed Cape Bearing geese, emus and visited a Koala Conservation Center. This began an introduction to the incomparable diversity of wildlife that can only be found only in Australia.

Harlan said that they saw a lot of Koalas during their trip Down Under, and they also saw an array of the unique animal life in wildlife sanctuaries. Get your dictionaries and internet search engines ready for some of these species. There were fairy penguins, miniature penguins (would you believe, Australia has 18 species of penguins!), kookaburras, wallabies, cassowaries, fur seals, wombats, dingoes, goannas, kangaroos of course, and last but not least, the infamous Tasmanian Devil.

Although separated by a great distance, Australia and the USA have much in common. Both were former English colonies and have language in common. Both began as vast unsettled areas that were colonized and settled as native aboriginal populations were displaced, and both are of similar geographical size. The United States is 20% larger than Australia in geographical area. It is in population, however, where the similarities end. USA population is 323 million. Australia population is only 24 million!

Most of Australia is a barren wilderness. We’re all familiar with the expression The Outback. Almost all of the nation’s population is on the east coast facing Polynesia and the nation of New Zealand. This is the area that the Horsts  traveled. Once they left the mainland, they visited the state of Tasmania which has a unique place in Australian history.

Like America, Australia was used extensively by the British as a penal colony. After the American Revolution it was used even more. I have read reports stating that without convict labor, Australia never would have been successfully colonized and settled, and Tasmania was a prime example. Nowhere is this historical fact more in evidence than at Port Arthur, Tasmania. At The Island of the Dead, 2,000 former inmates are buried on a two-acre tract. In the Tasmanian town of Richmond, the oldest standing bridge in Australia was also built by convicts. (See accompanying photo.)

Next, the Horsts’ travels took them to the beautiful nation of New Zealand for stops at Milford Sound, Fiordland National Park, Port Chalmers, Napier Wellington, and the capitol of Auckland.  New Zealand is a nation comprised of two islands and could very easily be the subject of an extensive tour in its own right. A big attraction there is the Lord of the Rings Tour which highlights the spectacular scenery known to fans of that highly successful movie series. Other highlights at New Zealand were at Mount Victoria, a kiwi fruit area, some interesting geothermal areas and a visit to a Maori village. Maoris were the original inhabitants of New Zealand and still comprise 15% of nation’s inhabitants.

Anyone getting exhausted by reading this article can begin to understand the scope of this exiting trip which covered a lot of territory and involved a lot of energy for the numerous tours. For those (like me) who haven’t yet made the big move to travel Down Under, the next best alternative is looking at the great pictures and the presentation put together by Harlan and Jeannie Horst. It was the trip of a lifetime that they will always remember.