With the onset of summer and the increase in use of the lake, we once again face an issue that seems to confound our community each and every year.  Trash.  Piles and piles of trash.  Overflowing dumpsters.  An increased hit to the budget.

Attempts over the past several years to bring compliance with trash rules have resulted in a limited degree of success.  Often times we work on a rule and while it looks good at the time, we discover as time passes that there may be some confusion or lack of clarity in it and we must return to the drawing board to get it right.

At the board meeting Sunday, the issue of trash was yet again a topic.  Compared to this time last year the Association has spent $1,000 more this year on hauling trash in dumpsters.  For Fiscal Year 2018 trash service was budgeted at $13,000. As of May 31 the Association has spent $4,700.91 or roughly 36% of budgeted funds. Should the trend continue we could easily surpass $16,000 or more for trash service this year. More frequent pickups and over-weight dumpsters cost the Association and the members. This is money that could be better spent on infrastructure and facilities at the lake. The tale was told several times last year on the Lake Viking Facebook page, particularly at Beach 2.

In anticipation of a holiday increase in trash, extra dumpsters are brought in. Over the last several years, however, even extra dumpsters cannot seem to keep up with the large amounts of trash.  Homeowners (members with developed lots) have a specific rule requiring them to maintain either half-year service or full-year trash service which they pay for in addition to their dues and assessments, so in essence those members are paying for trash service twice.

A recent audit of paid trash service was conducted and less than a handful of developed lot owners were not in compliance; however, follow up by the Association with those members resulted in full compliance within days of notification. The Association plans to continue monitoring compliance and will take action as necessary.

The rule itself does allow the homeowner (developed lot) on “occasion” to utilize the Association dumpster with paid service. So what is an “occasion?”  Originally the intent of the occasion rule was, for example, a homeowner was going out of town and it was going to be 4 or 5 days before the scheduled trash pickup. Rather than leaving a trash can by the road for a week or so, as long as they had that paid service, they could utilize a dumpster for that “occasion.”  I will grant you, that it is not clearly defined in the rule.

In addition, new signs have been posted at each dumpster site identifying the proper use of the dumpsters. “Accumulated trash in these areas” does not mean trash from your home or lot. If you have the “occasion” to utilize a dumpster and are in compliance with the rules the dumpsters in the maintenance yard are available for such a purpose. 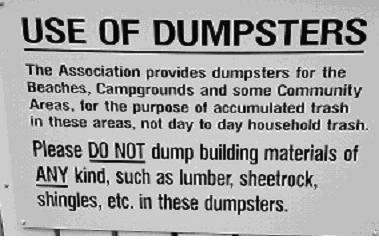 Here is a picture from the day after Memorial Day at Beach 2 where an extra dumpster was present in anticipation of the usual holiday overflow. As you can see, even with the additional “roll off” dumpster, it could not all be contained. Does anyone really believe Beach 2 or a community area or “an occasion” produced this much trash?

Because of the holiday, trash pickup was delayed until Tuesday. Six days later on the following Monday here are the two standard bins at Beach 2. This from a normal six days at Beach 2?  Doubtful.

In this picture, yard waste is noted in the dumpster which contributes to the problem of space for household trash, while a grill sits on the ground next to the bins. Campers are reminded that yard waste and metal items such as grills should be taken by the member to the burn area of the maintenance yard or metal bin located next to it. Maintenance is often tasked with the pickup and transportation of such items which takes time away from their other duties.

Articles regarding the trash issue and ability to purchase cards to utilize the dumpsters have been written over the past few years. Now is the time for what is hopefully a final re-write of the rules, where there is no conflict with other areas of the handbook, and to make sure rules are clearly defined, and that task will be undertaken. In addition several enforcement options were discussed at the Sunday meeting which will be vetted and some implemented. I will not speak to which options and when those options will be instituted. I will take this opportunity, however, to encourage members who are in compliance with having service or have paid the appropriate fee to have their membership card and supporting compliance documents with them when they utilize the dumpsters.

On page 39 of the handbook it clearly outlines how “unimproved” lot owners can utilize Association dumpsters by purchasing a card from the office to do so. The cost of the card for over a decade has been $25 for the year which allows the member use of the dumpsters. Unfortunately fewer than five members at its peak have taken advantage of this program, so far three members have this year. Not even a speck considering the amount of unimproved lots (no house) we have at the lake. It is recognized that there is a certain amount of trash and materials brought in from outside of the lake, and there are plans in the works to address that issue with the identification and prosecution of offenders.

This article should actually be considered step one in the education process. Clarifying and a rewrite of the rules necessary to address the problem will be step 2, and it will be announced as soon as it is completed so all are aware of the rule changes. I encourage each and every member to obtain the current membership handbook and look at the rules regarding trash disposal while understanding that in the coming months those rules may have some changes.  Any changes will be in the monthly paper and posted on other media avenues the lake utilizes.

The final step in the educational process (and it will be coming very soon) will most likely be an encounter with the Safety Office resulting in an infraction violation and a meeting with the Infraction Committee.  While the Association will continue to investigate other avenues of trash disposal, your cooperation is deeply appreciated.

We as members have to step up and become responsible for our own trash control as well as help the Association keep down costs. The Safety Office will do their best to continue to increase monitoring of the areas for non-compliance; however, they cannot do it alone. Any assistance you can provide them would be appreciated. If you are a member in compliance and are stopped by the Safety Office while dumping, understand they are not trying to make your life miserable; they are trying to enforce the rules which in turn will save you money.

At the board meeting on Sunday the fine for lot owners utilizing dumpsters without the card or paid for trash service increased from a MINIMUM $100 fine to $250. It’s simple math. Take your chances of getting caught and an infraction ticket with a minimum fine of $250 or spend $25 bucks on the card, maintain paid trash service and not have an issue. It’s your choice.