I’ll put it this way: Tomoyuki Tanaka would be turning over in his grave. For those who don’t know, Tanaka was one of the creators of the Japanese Horror Classic Godzilla. First appearing in 1954, Godzilla has become a worldwide pop culture icon. Looking at Godzilla 64 years later, especially compared to the ultra hi-tech studio creations in today’s multi-million dollar movie industry, the creature looks pretty hokey, almost comical, but in its day (for those who are old enough to remember), Godzilla struck fear and terror into the hearts of movie audiences.

A generation previous had experienced even greater terror with the 1938 Orson Welles radio production War of the Worlds. Wells at the time had a radio show in which he did a broadcast version of the H.G. Wells novel by the same name. The broadcast in which Orson Welles simulated coverage of an alien invasion (Martians in this case) caused mass hysteria among a large radio audience. People jumped off bridges and fled the cities en masse causing traffic jams. Welles for his part was propelled to instant fame and went on to become a famous movie actor and producer.

Now, 80 years after the War of the Worlds scare, I must announce the arrival of aliens at Lake Viking. Seriously! This alien invasion had inauspicious beginnings with the first sighting probably being the giant unicorn on David and Dustin Hibler’s shoreline. Then, there was the big blue peacock brazenly perched in the water just south of the Association Safety Patrol Dock. Next, was the arrival of a huge pink flamingo not far from our place. In fact, every day, I can see the creature’s giant pink head looming above the tree line to the west.

These things are everywhere. They’re popping up all over the lake: some large, some smaller and all carrying the same DNA. The unicorns, for example, all have that same rainbow colored tails, the same bland, sedated expressions on their faces, and somewhere in the mix there are big plastic chickens as well.

Thankfully, Lake Viking people are taking the arrival of these creatures in stride – flying by them on jet skis, pontoons, Cobalts, and fishing boats without a second thought. No panic, no hysteria, only stoic acceptance. Maybe it’s because of an appearance that is somewhat attractive in a weird sort of way: bright neon colors, striking profiles . . . and some of the alien creatures even appear to be smiling. 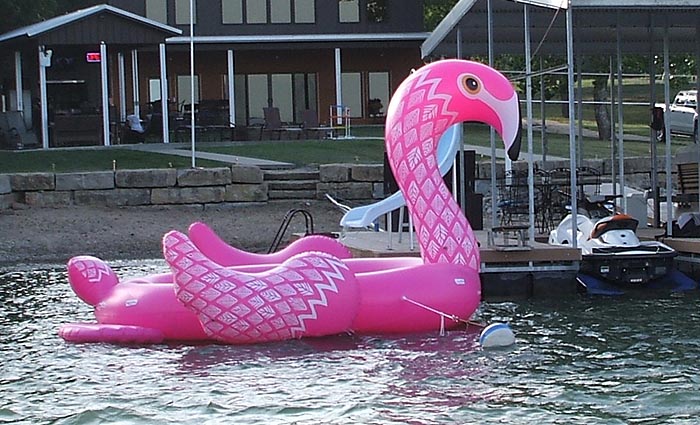 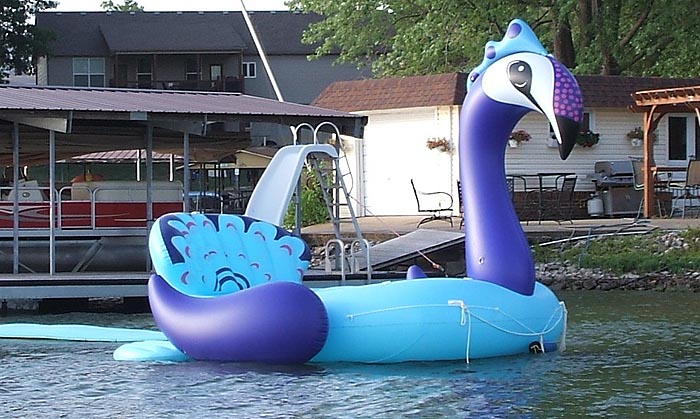 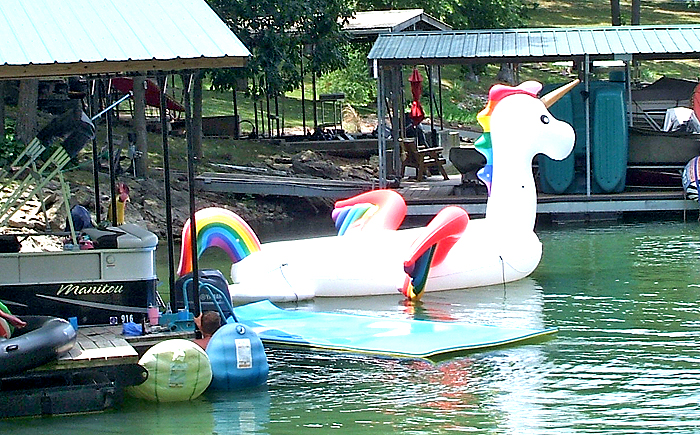