Reliving a Festive July 4th at the Lake

The July 4th celebration at Lake Viking is always the busiest and most celebrated time of the year, yet each holiday weekend is unique, just a little bit different from the others. Especially this year.
If one had to choose a title for this year’s holiday, it would be “Where Are the Boats?” There were cars everywhere, in all the driveways, but traffic on the water was unusually light. As for fireworks day, on June 30, the day started as usual with the well attended Lions Club breakfast. In fact food was plentiful throughout the day with four food trucks. There was also the craft bazaar at the clubhouse.

Activities Chair Mary Hibler was pleased with the turnout of the Craft Bazaar – both in the number of attendees and vendors. Maybe part of the reason for a good crowd was the opportunity to buy a raffle ticket for a butchered hog donated by Ricky Hendricks, who is the brother of longtime Association Employee Rusty Hendricks and the owner of the Chillicothe Locker. There were two winners of the raffle, each winning half a hog. One of the winners was Greg DeCamp while the other winner was Joan Trozzolo. This was a pleasant twist of irony. Earlier in the day, kids from the Trozzolo family were giving away free ice cream from their dock. As they say, what goes around comes around.

Finally, as the evening wore on, it was time for the association fireworks display. As everyone knows, June was hot . . . and dry. The area has been desperately short of rain with the lake level lower than it has been in years. But wouldn’t you know it, just as darkness approached and the temperature had taken a rather dramatic plunge from a high of 96 to 83 degrees …a big rain cloud appeared in the sky. Sprinkles of rain were felt as the fireworks began. Fearing more rain, the fireworks people hurried through the program. The fireworks were spectacular as usual, but lasted only 10 minutes!

Our back yard has one of the lake’s best views of the Beach One fireworks display. Over the years, we have noticed that when all of the boats come out to watch the fireworks, they hang farther back in the lake. Part of the reason is that security directs them to do so, in order to avoid congestion from boat traffic. But I think another reason is so the boaters have a better view of what has unofficially become “part two” of the Lake Viking fireworks show, that being the spectacular fireworks extravaganza put on at Beach Two by the Confortis. This year’s version started right after the Association’s display ended and went on for an unbelievable time of fifty-seven minutes! Wow.

July 4 at Lake Viking is history now. Again, we were fortunate to have a safe holiday. There was at least one emergency responder call to assist an Association member. The individual, who remains anonymous, nevertheless would like to express gratitude for the Lake Viking Safety Officers and emergency responders who were on hand to assist. 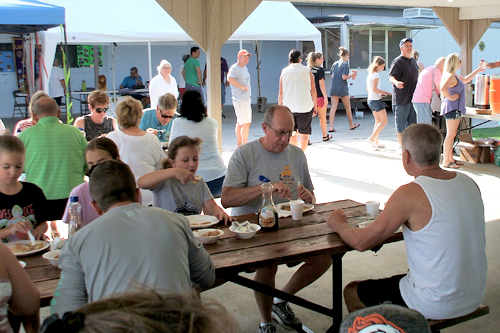 As always, Lions Club Pancake Breakfast was a popular event. 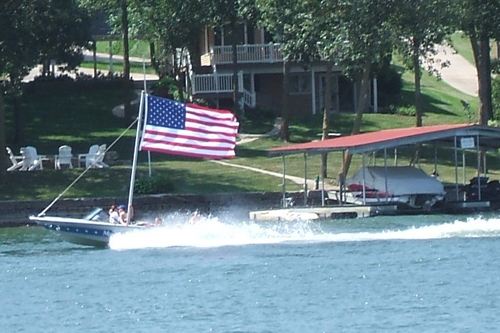 This boat proudly displaying the American flag on July 4th at Lake Viking.

Pallet artwork on display outside the Lake Viking Clubhouse 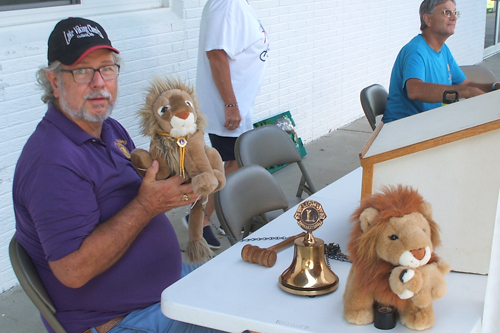