Mike Caudle came back to his hometown to make a video for CMT which debuted July 4 worldwide. The video features a rising star country duo known as Post Monroe.

Mike is a 1995 graduate of Winston R-6 High School. He attended UCM at Warrensburg and ended up in the hospitality industry. He moved to Iowa in 2000. He was a co-owner of a live music venue in West Des Moines, IA. Mike’s introduction to the film business came in 2010 when he submitted a concept for a “bar rescue” style show called “American Spirits”. Mike says he was one of the first to offer a nightclub-style show to the network show runners. The producers passed on his concept; however, filming for “Bar Rescue” suddenly was announced for Spike TV just four weeks after his contract had expired.

“It happens all the time in Hollywood,” he says. “They took elements of our concept and did something that cost less per episode than our show would have been.”
Mike wasn’t angry or bitter about it… “I was excited that they thought our idea was good enough for a produced show.”

Mike got a second break when he produced six episodes of “The Fence” which covered the sensitive issue of suicide among America’s veterans. His video was purchased by Air National Guard and was used as a training module for suicide prevention.

During this time, Mike still co-owned the Bombay Bicycle Club, but he and his partners decided to sell the place in 2012. He thought about opening a new bar, but realized he was happier making films than being in the bar business.

He connected with Jacob Moyer, the owner of Luminary Creative, a video and film-making company who had worked with Mike on several productions. He asked Jacob to teach him the business.
“Everybody thought I was crazy,” he says. “How was I going to make a living doing film in Des Moines, Iowa?”

But Luminary Creative has been very successful, winning many awards, including numerous Emmy and Telly awards; and is now in its eighth year. The crew is all skilled in music videos, advertising, political ads, brand videos, feature films, short films, corporate videos and government contracted videos. To see some of their work you can visit www.luminarycreative.com.

Luminary Creative was filming a movie in Minnesota when Mike and Jacob worked with actor Bryson Sams, a cast member. Bryson’s father, Dean Sams, is a founding member of Lonestar, the famous country music band. After the film wrapped Dean Sams asked Luminary to submit a video treatment for an upcoming song release for Lonestar.
“Our video for ‘Just the Rain’ was the unanimous pick among the band members,” Mike said. A year later, Luminary was called back to do another video for Lonestar’s tenth studio album, “Never Enders”.

“That was when we started meeting a lot of agents and music people in Nashville,” says Mike. We made the decision to open up our second office there.”

Ashley Hewitt of Post Monroe, worked with Luminary on the set of a movie. She loved working with Jacob, Luminary’s director, and wanted to work with him on her videos. Later she and Duncan formed Post Monroe. 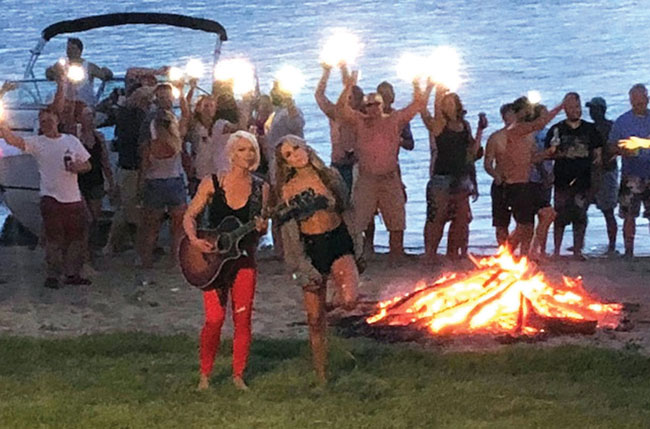 Post Monroe is a country duo comprised of Whitney Duncan and Ashlee Hewitt. Post Monroe was named Rolling Stone Country’s ’10 Artists You Need To Know’ and have performed multiple times on The Grand Ole Opry. They are also part of CMT’s Next Women of Country. Luminary Creative has done six videos for the singing group to date. This year Post Monroe called and explained that due to the recent success on iTunes CMT wanted a video for their new song “Coke & Rum”.

“We have been extremely busy, and only had one available day on our calendar, so we told them they had to come to us,” Mike says. “We were worried if the weather wasn’t good we would miss the window.”

Mike, who grew up at Lake Viking, thought the lake would be the perfect backdrop for the video. The filming was done the night of Friday, June 15, and wrapped around 1 a.m. the following Sunday morning.
“Everyone in the community jumped on board and helped us,” he says. “They provided us with everything we needed for the video. We asked for two special trucks and we had them in 10 minutes.”

The Gallatin square is used in one scene of the video and Mayor Barb Ballew’s home was also used as a location. The town was filmed at night and appeared empty except for the two Post Monroe girls cruising around. They drive through the one stop light in town and see the girls’ crushes in a truck. They pull over in front of Elbert’s where the scene ends.
Another scene is filmed on a long gravel road near Altamont.

The rest of the scenes are filmed at Beach One at Lake Viking.
“We scouted Lake Viking prior to shooting the video,” says Mike. “The three minutes of video came out of 18 hours of film footage.

Luminary had worked previously with Randy Tague of the Lake Viking Marina. Luminary filmed a commercial for the marina last summer. Randy helped introduce Luminary to Jackie and Kenny Derks. The Derks loved the idea of filming at their beautiful lake home and opened their doors to Luminary.

“They have the perfect dock built for fun!” said Mike. “Kenny and Jackie Derks were incredible hosts. They invited 50 of their closet friends, family, and neighbors to be extras. They provided food and drinks for everyone. As well as inviting Post Monroe to stay with them while filming. They personally cooked and served all the meals. They went above and beyond, we couldn’t be more grateful to Derks for their hospitality!”

The premier of the video is being handled by CMT (Country Music Television). CMT will debut the video Wednesday July 4, 2018. The video will be in rotation during CMTs’ regular weekend programming.

“We would also like to thank the City of Gallatin, Mayor Barb Ballew, the Lake Viking Association, Chad Mort, the Lake Viking Fire Department volunteers, Lake Viking Marine, Rob’s Cycle and everyone that helped us in the making of “Coke & Rum” music video.

“I think growing up at the Lake, going to a small school, working at the McDonald’s Tea Room, and being surrounded by so many great people in our community has really helped me in all of the videos I do today,” said Mike. “I think it’s easier to connect with people when you come from a small town; it has been a place I have drawn a lot of inspiration from in all of my video work.” 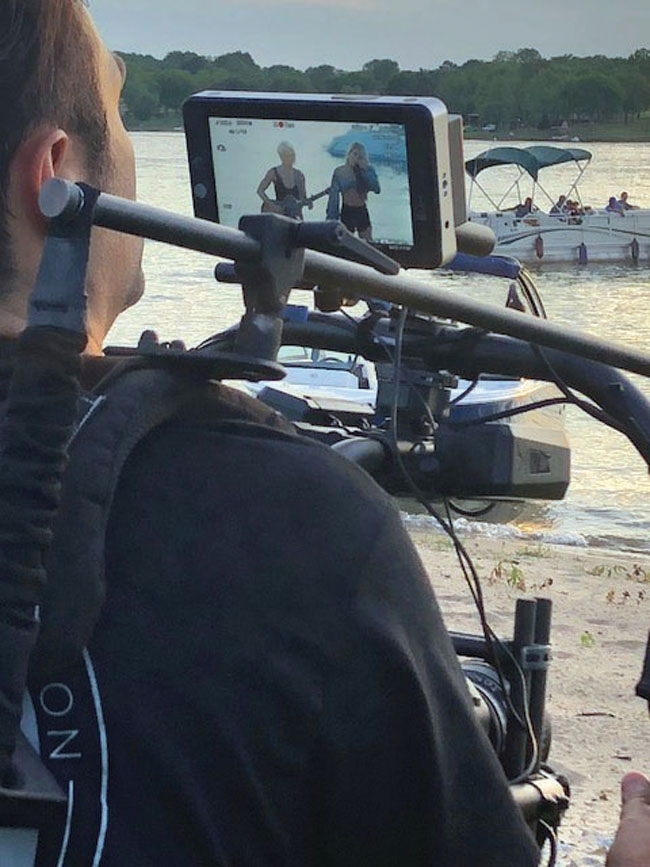