Shovel Brigade to the Rescue

You’ve all heard the old expression “when it rains it pours,” right? While aphorisms about rain do not seem relevant in this season of drought, the proverb can still ring true in real life day-to-day situations. In fact, Association Member Don Porter must have felt that way on a recent Sunday morning, when he had to rush his wife, Diane, to the hospital because she was suffering stroke-like symptoms. And, oh yes, there was this problem with low water pressure and finally no water pressure. And as Don left for the hospital, he noticed a mini Old Faithful-like geyser spurting from the ground not far from his water meter. Yep, when it rains, it pours. He definitely had a broken water line, and being Sunday, it would be next to impossible to get it fixed right away.

Well, Don and Diane wouldn’t be singing with the Lake Viking Church Choir on that particular Sunday, and when word of their plight reached Pastor Robert Nelson, he came up with an immediate plan. He had already been involved in the volunteer effort to hand out bottled water at Altamont as a result of the water troubles at PWSD #1. By this time, he was getting to be an experienced hand in the water emergency business, so he announced in church that he needed a group of men to help with the broken water line. It couldn’t be nearly as bad a problem as an entire water district going down. After all, even if Roger Barker had shut off the water, there had been a geyser and the wet spot would identify where the break was while also softening the otherwise sun-baked and drought hardened ground for digging.

So, after church, a sizable group of men (plus Peggy Lankford who proved to be as good a digger, or better, than many of the men) showed up on the Porter property. Also on hand were several ladies with a mini refreshment stand of lemonade, sandwiches, etc. It was hot that day with an eventual high of 99, but there was a wonderful breeze blowing off the lake. The leak was quickly identified, and the next challenge of replacing the T-fitting for an above ground hydrant was made easier when one of the guys showed up with a big wooden box full of fittings of all sizes. Remarkably, the defective old rust-covered fitting was broken loose so it could be replaced. A few hours, after the operation had commenced, we turned the water shut-off back on  . . . and no more geyser!

Later, Diane was given a clean of health and when the Porters returned home, voila, they had running water. I don’t know the exact sequence of events that occurred when Don and Diane got home but I have a feeling, at some point in time, they turned a faucet on, listened to the reassuring sound of running water and thanked the Lord for the way that the Sunday had turned out after such a poor start. How easy it is to sometimes take the small things for granted. 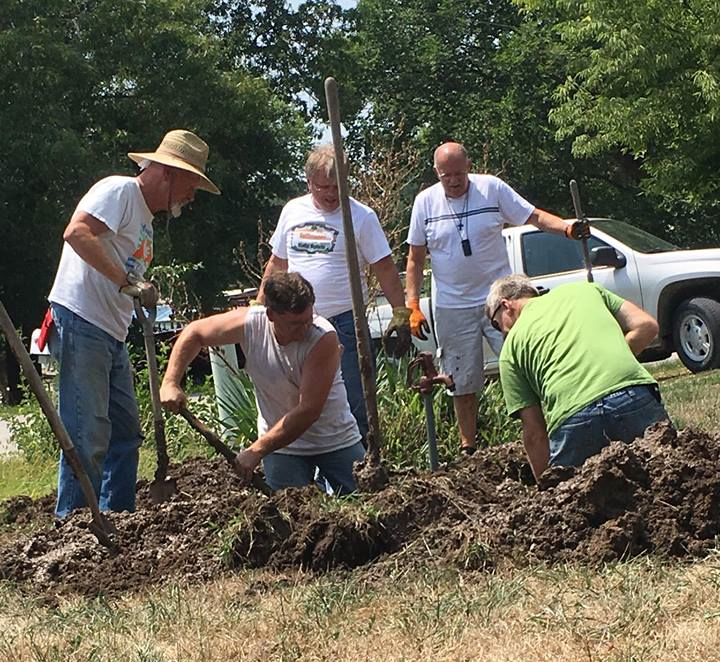 Pastor Robert Nelson (center) leads some of the “Shovel Brigade.”