Journey to Land of Fire and Ice

“Do not try to spell or pronounce the names there,” Harlan Horst warns. Good advice, but otherwise Iceland is a beautiful place. Harlan should know. He, along with his wife Jeannie and their Lake Viking neighbors Dan and Kim Ackhart, travelled to the Land of Fire and Ice and spent five days there. The scenery of Iceland was spectacular. The large island nation situated close to the Arctic is actually considered as part of Europe, and with a population of 358,000, it is definitely the most sparsely populated nation of Europe.

Iceland features a high degree of geological activity which means volcanoes and geysers, while 10,000 waterfalls and 269 glaciers are also showcased in the scenic landscape. The nation’s population enjoys the advantage of electrical power being produced from geothermal sources. That heat, by the way, is appreciated. The Horsts and Ackharts were there in September but the climate was already cold and windy. The travelers were able to view the Northern lights and drink pristine and pure tap water. Iceland is considered to be among the “greenest” and most environmentally friendly places on the planet.

And, oh, about those unpronounceable names. Sure there are places like Vik and Hof, but then how about the Reynisddrangar basalt stacks, the Brioamerkurjokull glacier, or better yet – take a deep breath –  Eyjafjallajokul, which happens to be a very active volcano.

Maybe those long names are the responsibility of the early Norse explorers who first settled the country in the eighth century. Yep, blame it on the Vikings; they have broad shoulders. As far as our recent travelers from Lake Viking, the Horsts and the Ackharts were impressed with what they saw. As Harlan’s photos confirm, the scenery is breathtaking. Harlan states that the landscapes were “magical” with the “different terrain around every turn” ranging from rugged coastlines to spectacular waterfalls and pastoral farms with sheep, horses and dairy cattle in the pastures. 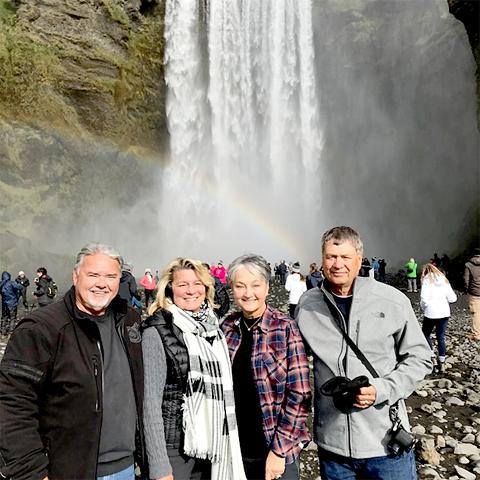