As the immortal Clint Eastwood character Dirty Harry once said: “Do you feel lucky? Well do you, punk?” If the answer is yes, then the 4th Annual Gallatin Rotary Trivia contest held on Feb. 2 was the place for you.

Questions ranged from birds (including angry birds) and bees (South African Killer Bees, of course) to Alice in Wonderland, Beatlemania, early MTV, geography, sports, yes, even Foghorn Leghorn, and so much more. For the mathematicians, there was even an equation, about as long as your arm, in which you were to identify the value of the X. Wonder if anyone got that right?

The event, held at the Jamesport Spillman Center, included a silent auction (with an autographed picture of Patrick Mahomes) and was a big success. With the combined proceeds from the silent auction, registration fees, and, oh yes, the sale of mulligans, would you believe $5,000 raised for local charities?

Eighteen teams competed and the champion was Kyle’s Whiz Kids. Once again the event featured plenty of participation from Lake Viking folks. Not only from Kyle Parkhurst, wife Sherry, and yours truly of Whiz Kids fame, but also from many other Association members. Tim Tadlock once again excelled as MC. And . . . “hey, don’t forget, we were winners last year,” Markay August and Peggy Lankford of Vintage Teachers have already reminded me.

Once again, it was all about the great trivia questions which always make these events a learning experience. Did you know, for example, that the humble Paw Paw, native to Missouri, is the largest edible fruit that grows on a tree? Good information. And if you had looked at a world map lately, you would have surely been able to correctly answer which of the four cities – Cape Horn, South Africa; Brisbane, Australia; Santiago, Chile; or Dunedin, New Zealand – is southernmost. And you surely can’t forget the 99-yard touchdown run that Tony Dorsett of the Dallas Cowboys made . . . in 1983!

Once again Daren Adkins did a masterful job with the presentation which was further enhanced by the Jeopardy music during the suspense-filled contest.

Incidentally, there was a Clint Eastwood question; what kind of gun did Dirty Harry use? Hey, I’m not telling. It’s your turn to guess, and the question was a two pointer. 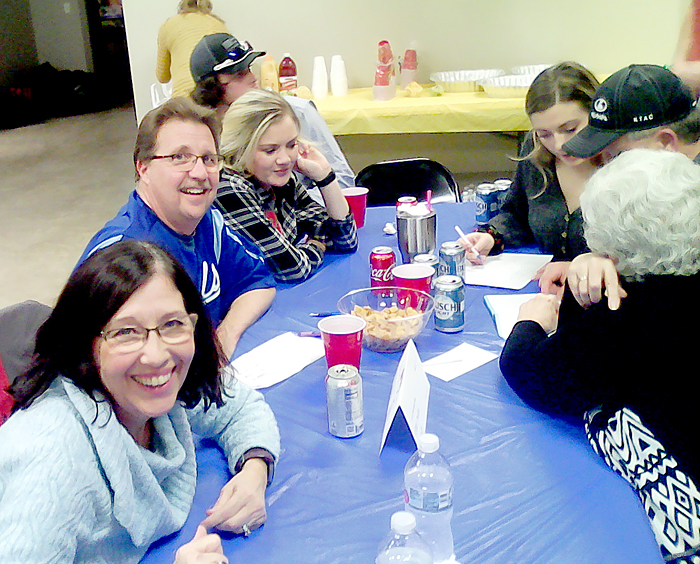 Susan and Len Zalenski are brainstorming for team Maximum Impact