What could be more of an American Classic than Gilligan’s Island? I mean everyone is familiar with the story. From the TV reruns – right? Even if it didn’t exactly happen in America (it happened on an unnamed island defined in the song’s lyrics as “just a 3 hour tour” from Honolulu), the story is as American as Apple Pie. All totaled, the show lasted three years with 98 original episodes, but it has been immortalized, engrained in the psyche of three generations, because of, yep, you guessed it, the endless syndicated TV reruns.

OK, I think you get the picture. Gilligan’s Island is a towering testament to the power of syndicated TV reruns. The show, along with the likes of MASH, Andy of Mayberry, Seinfeld and Friends, is truly one of the pillars of immortality in Rerun Valhalla. And after years of being a TV rerun, Gilligan’s Island also became a musical. The production, in my humble opinion, arrived at another threshold of greatness when it became a Gallatin Theater League production.

Call me biased, but in my opinion the Gallatin Theater League and Lake Viking have something in common. Both are “best kept secrets” in Northwest Missouri. Each time I attend a GTL production, I see the faces of Lake Viking Association members in the audience, and I know for a fact that members of the audience also come from many neighboring communities. Over the years, the GTL has done a wonderful job putting on some big name theater productions – The Pajama Game, Guys & Dolls, Harvey, Oklahoma. So why not Gilligan’s Island?

The GTL did a fabulous job with Gilligan’s Island. The local talent we have in the area is amazing. Let me put it this way: from now on, when I’m shopping at Dungy’s Grocery in Gallatin, I will always look at Jeremy Dungy with an added element of appreciation. He was a perfect Gilligan. Likewise with Tim Thompson who played the skipper. And there could not have been a better couple to play pampered and entitled multi-millionaires Thurston Howell the Third and wife Lovey . . . than Doug Nichols and County Attorney Annie Gibson.

When speaking of Doug Nichols, it is an undisputed fact that he has a loyal “cult following,” myself included, that is continually in awe of the hilarious facial expressions he comes up with. Doug also produced a perfect mimicry of the voice of Jim Backus who played the Thurston Howell part on the TV show. Nichols was also director of the production. Doug’s wife, Jackie, who is likewise a veteran GTL performer, played an alien who had a very poignant message for earthlings (see photo).

The entire cast of Gilligan’s Island – which also included Erin Stith as Ginger, Keri Youtsey as Mary Ann, and veteran GTL performer Mark Gay as the Professor –did a tremendous job! This well-done GTL production was not a fluke. Comedy is the troupe’s specialty, and they have come up with hilarious productions year after year. Every time I see one of their plays, I think that they will never outdo themselves . . . but they always do. For those readers who have not seen the Gallatin Theater League in action, I highly suggest going to future performances. 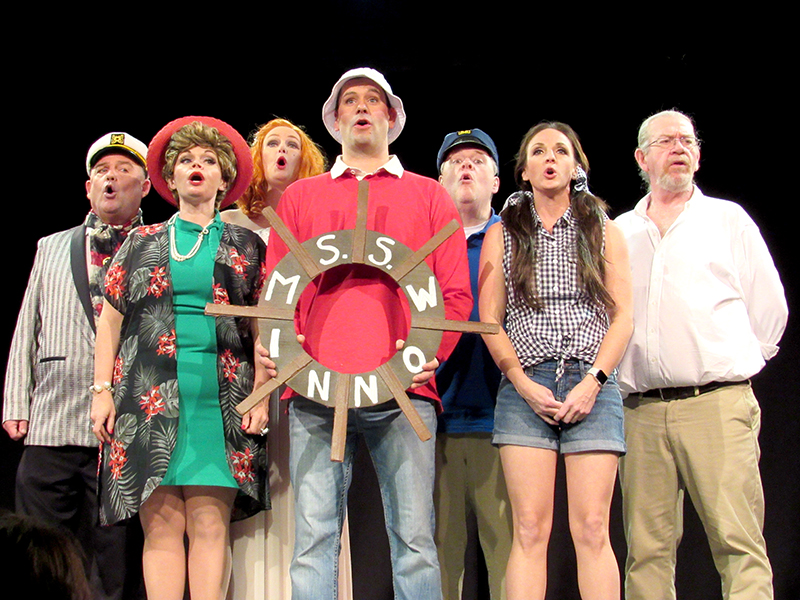