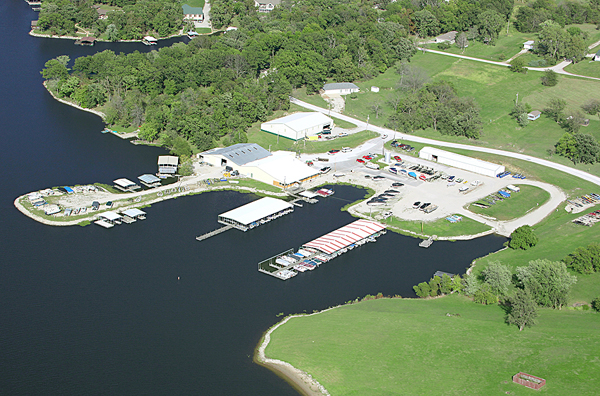 Only On-the-Water Marina in NW Missouri!

Throughout Lake Viking’s history, there have been numerous conditions that have contributed to the Lake’s growth and success. One of the advantages Lake Viking has always enjoyed is the presence of a marina.

In December of 1967, the Lake Viking News announced: “Construction is under way on Tate Marine Inc. — the only Marina to be located on beautiful Lake Viking.” Kimball Engineering designed the marina. Plans called for a building, a hard-surface parking area, a concrete launching ramp, and a marine gas and oil dock. 100 boat-slips were in the plans and everything was to be completed by spring of 1968.

In November of 1969, owners Hubert Tate and manager Phil Tate announced that the marina building was completed. They were ready to accept boats to winterize and for storage. In April of 1970, Tate Marine announced that they were ready for a big season, and had a full-time factory trained mechanic who had spent the winter at Waukegan, IL, attending service school.

That mechanic happened to be Larry Tague, who continued to work for Tate Marine until 1973. From there, Larry moved to Carthage, Mo. to become assistant manager at Bob Carroll Marine. By 1977, the Tate’s sold the Marina. The new owners changed the name to Viking Marina. They also hired a manager — Larry Tague, who returned and continued to manage the operation until 1983.

In 1986, the marina was sold to Roland Malot. In March, 1988 foreclosure was initiated by the Mercantile Bank of Kansas City. The marina was going bankrupt!

About the time when things were looking the worst is when a big turn-around began. Glen Mayo, who had been very active both with the Association and with the Lions Club, bought the marina from the Mercantile Bank.

Mayo was a good businessman. The first thing he did was to select a partner, who was knowledgeable in selling and servicing boats. That partner was none other than Larry Tague. Larry had been building his resume with career stops at the Midwest Marine in Leavenworth and the Village Marine at Lake of the Ozarks.

Mayo took Larry Tague as part-owner of the newly named Lake Viking Marine with the understanding that Larry’s ownership would increase as the Marina’s sales performance increased. Tague would manage the marina, select boat lines, hire employees, and supervise all aspects of the business operation.

The success of Lake Viking Marine is no accident. Each year, the marina sets up at boat shows in cities in the Midwest. Sales are also Internet driven with the web-site accounting for 80% of used boat sales.

In 2006, from a list of 4,000 applicants, the boating industry ranked the Top 100 dealerships in the nation. Lake Viking was number 74, nationwide, and 5th in the nation in Customer Service Index.

Lake Viking Marine is among only 99 dealerships awarded a five-star rating by National Marine Mfg. Association, and the first in Missouri to garner the five-star award.

from the April 5, 2017, edition
of the Gallatin North Missourian, written by Troy Lesan

“It’s been a great run, and we want to extend a big thank you to the Lake Viking owners and the great people who have been our customers,” said owner Larry Tague, as he announced the sale of Lake Viking Marine. Larry is looking forward to spending more quality time with family, and traveling. When he became part of the ownership group of Lake Viking Marine in 1988, the company had annual revenues of $200,000 and had experienced bankruptcy. In recent years revenues have been around $6 million and the company has 15 employees.

“Lake Viking begins the next step in our strategy to accelerate growth and expansion with an increased focus on acquisitions,” stated Mike Tutor, president of Marine Sales Group. “We are excited to partner with Randy and Lake Viking and the business that the Tague family has successfully built and operated since 1988.”

“With our shared brand lines and business philosophies, partnering with Marine Sales was an easy decision,” said Randy Tague. “We will continue to operate locally as Lake Viking Marine, but this merger will provide us greater benefits for our employees and opportunities for our customers.”