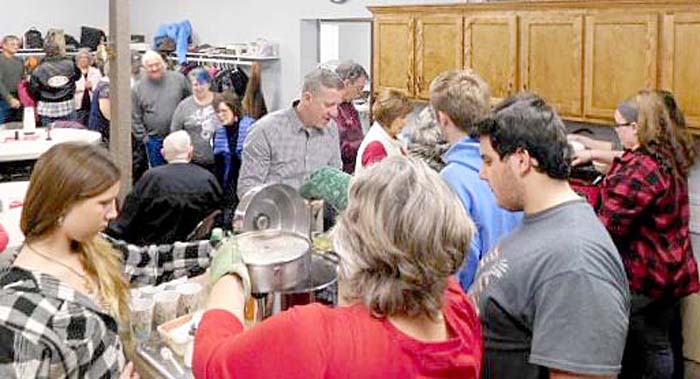 It’s nice to be able to write about the win-win situations… like the youth spaghetti dinner and auction at the Lake Viking Church held Feb. 10. The spaghetti and desserts were very tasty, but it was the big auction, afterward, that really put the icing on the cake. Literally, because there were a lot of cakes with icing and a whole lot of other good stuff auctioned off by Pastor Robert Nelson.

The main reason that there was so much stuff at the auction can be directly attributed to Church Super-Secretary Jo Gould who traipsed all around the countryside and signed up nearly 60 sponsors! There was an entire page in a recent church bulletin listing them; they were from seven communities in four different counties. Sponsors gave either cash donations or items to be auctioned. Boy, did they ever. The auction featured 60 different gift certificates and many other diverse items ranging from movie DVDs to a nice stained glass window to a set of hunting knives.

This youth spaghetti dinner has become a tradition in recent years. Held in February and featuring good food, good auction items, and last but not least a tremendous array of cookies, pies, and cakes up for auction. Anyone who has been to one of these events knows that those pies and cakes really bring in the money as the result of some pretty intense and competitive bidding. The secret is to bake a pie or cake that someone really likes and watch the bidding take off. This year was no exception. An Oreo cake brought $80, and after a lively round of bidding, some cupcakes were sold for $101. (Wow! Were there gold bullion shavings in the frosting of those cupcakes?)

Like I said, this event was a story that was a win-win situation. A good dinner, great desserts, good fellowship, good fun, and great generosity from friends contributed to the good turnout. All totaled the youth of Lake Viking Church made a whopping $5,310!!!! Lake Viking Church Youth Director Randy Goin and Pastor Robert Nelson would like to thank everyone who contributed to the success of this event. The Lake Viking Youth continue to build on this positive tradition. Like I said: a win-win situation. 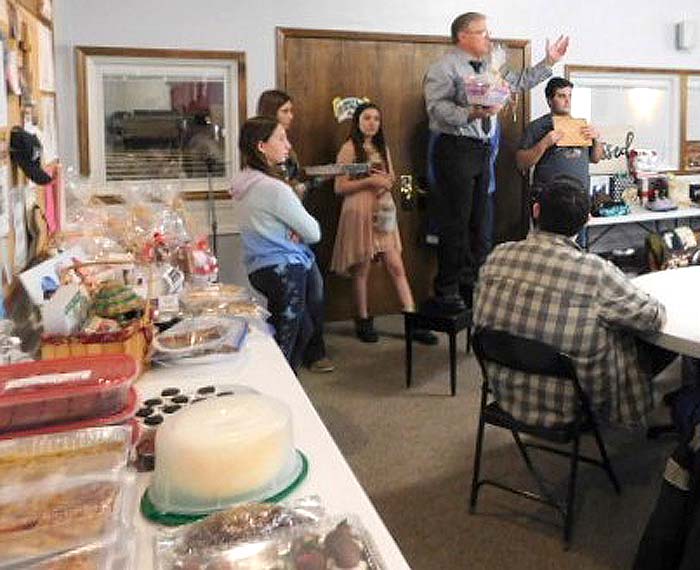 Is Pastor Robert Nelson preaching another sermon? No, he’s auctioning a cake!