On Nov. 23, Daviess County native David Sandy helped bring in the Christmas season at the Courter Theater in Gallatin with his world-famous magic show. Admission to the show was free as part of Gallatin’s Christmas on The Square.

Sandy took up magic as a hobby at the young age of six. After entertaining his fellow first-graders with a simple card trick taught to him by his father, David was hooked.

“I did my very first magic performance in Gallatin when I was only seven years old,” recalls Sandy.  “Even though that was 49 years ago, I remember it well… it was at Dockery Park.”

As a youngster, he began entertaining at service organization banquets, scouting events, local meetings and schools. His reputation as a great entertainer even as a teenager took him to resorts, theaters and conventions where he was often the featured entertainer. At the age of 14, he met Faucett W. Ross, a retired professional magician who lived in St. Joseph. Faucett became David’s close friend and mentor.

David Sandy has been entertaining professionally throughout the heart of America and along both coasts since the 1970s, including regular appearances at the world-famous Magic Castle in Hollywood, Calif. David has been twice awarded the title of “Stage Magician of the Year,” in addition to being named “Close-Up Magician of the Year” from Ring 129 of the International Brotherhood of Magicians. He is also a member of the prestigious Inner Magic Circle of London, England, and an honorary lifetime member of the world-famous Magic Castle in Hollywood, CA.

In addition to his busy performing schedule, David works as a producer of a variety of touring shows, symphonic concerts, festivals and special events.

“Even though my magic has taken me all over the world, I absolutely love coming back and performing in the area where I grew up and it all started,” Sandy says. 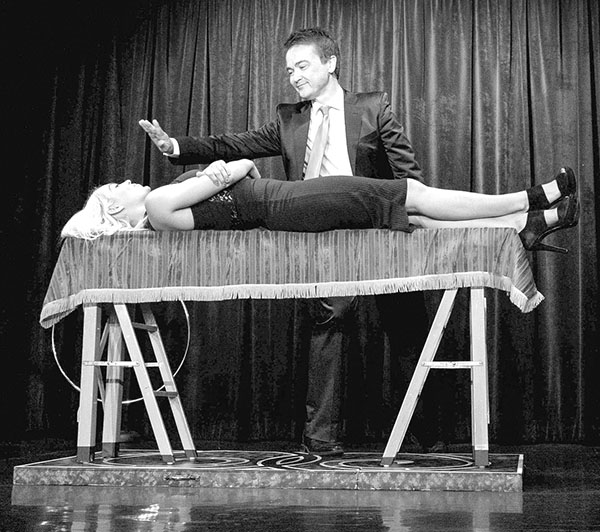