He was born on July 13, 1945, to Lee and Hazel (Palmer) Crawford in Beckley, WV. Ralph grew up and attended school in Sophie, WV. On March 14, 1969, he was united in marriage to Judy McKellips. After their marriage they lived in Smithville and moved to Kansas City where they made their home.

Ralph worked for Owens Corning Fiberglass in Kansas City, KS, for over 35 years. After his retirement, he continued to work and delivered radiation therapy for cancer patients. Ralph was an avid outdoorsman and loved camping and fishing at Lake Viking. He made many friends at the lake that became family. Ralph enjoyed playing and coaching sports and watching the Chiefs and Royals. He was a member of the First Christian Church in North Kansas City.

He is survived by his wife of 51 years, Judy; daughters, Melissa (Mike) Luster and Amanda (Ryan) Miller; two granddaughters, Kierstin and Taylor; sisters, Shirley Kendrick and Juanita Fleig; several nieces and nephews, other relatives and many friends.

The funeral service was held July 16 at Hixson-Klein Funeral Home, Smithville, with visitation prior to the service. 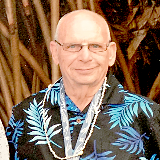