Wilton Hugh Adkins, 87, Savannah, passed away Oct. 18, 2020, surrounded by family. Wilton was born Jan. 13, 1933, in Savannah to the late Merle Columbus and Crystal Ann (Schweizer) Adkins. He graduated from Rosendale High School in 1951 and was active in FFA, State Livestock Judging Team, 4-H, football and softball.

Wilton was in the United States Army and served his country honorably from 1953 to 1955. He was stationed in Germany during the Korean Conflict.

After returning, Wilton married Beverly Jean Fothergill on June 5, 1955 at First Christian Church in Rosendale. They had four children, Kathy, Susan, Connie and Randy. Wilton and Beverly dairied until 1965. He farmed the remainder of his life.

Wilton was also a substitute USPS Rural Mail Carrier, an Andrew County Judge/Commissioner for 10 years and presiding commissioner for four of those 10 years, a real estate salesman, helped his parents with construction, and was always “The Boss.”

Wilton grew up attending the First Christian Church in Rosendale, and later served as a deacon and board member of First Christian Church in Savannah. He was a member of the American Legion Savannah Post #287, where he served as commander of Savannah Chapter and participated as Honor Guard Firing Squad for veteran funerals. He was on the fair board and helped manage the race track. He was also a project leader of 4-H, a Democrat committeeman, and volunteer for County and State Emergency Management. He started Savannah Girls Softball Leagues and coached Adkins Construction Girls Softball in Savannah. They won state and played in a national tournament.

Mr. Adkins was cremated under the direction of Heaton-Bowman-Smith Savannah Chapel. Visitation and Celebration of Life were held Oct. 22 at First Christian Church in Savannah. Inurnment was at Bennett Lane Cemetery. The family requests memorial donations be made to the North Andrew Scholarship Foundation – Wilton Adkins Memorial. 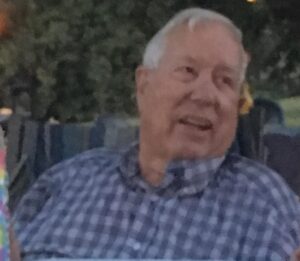